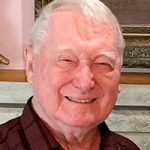 Richard Daniel “Dick” Norton departed this world on Tuesday, December 22, 2020, to be with his Lord and Savior, Jesus Christ.
He was born in Bellefontaine, Ohio on May 15, 1932, to the late Howard Cecil Norton and Jeanette Moriah Reames.   He was married June 29, 1951, to Nancy “Nan” Ricketts, who passed away in April, 1987.   He married Kandy Shroyer Wright on July 1, 1990, and she survives.  He was also preceded in death by a brother, C. Howard “Ken” (Scotty) Norton and sister, Marie Russell) Taylor, and a brother-in-law Elmer Dortzbach. He is survived by his older sister, Marjorie Dortzbach, Penney Farms, FL, six children, Shirley Hammond, Ric (Tina) Norton, Robin (Steve) Price, Angela (Tim) Knapp, Mary (Brian) Davis, Sarah (Dean) Elliott, all of Logan County, 13 grandchildren, 14 great-grandchildren, and 3 great-great grandchildren.
Dick has attended Calvary Baptist Church since 1939.  Over the past 81 years he has served in numerous capacities at Calvary, including Song Leader during worship services, Sky Pilot Commander, Word of Life Director, Awana Commander, Sunday School Superintendent, Sunday School teacher, and Deacon.  He also served as a board member of Children Choosing Christ.  Dick traveled to Central African Republic for Baptist Mid-Missions in 1988 for 3 months to build a hospital, operating room, and ward building.  He went to South Korea for two months in 2003 and again in 2007 with Word of Life South Korea to teach English in their SYME Bible School. From 1996 to 2016 Dick traveled to 2-3 countries per year, including 7 trips to Papua New Guinea, for missions.  He has continued to have a heart for service until the Lord called him home.
Graduating from Bellefontaine High School in 1951, Dick joined the Air Force and served his country during the Korean War from 1951 through 1955 where he served in Arizona and Alaska.   Dick worked in construction his whole life, being trained by his father as he was growing up, working through June of 2018.  Starting in the fall of 2018 Dick worked for RV Wholesalers in Lakeview, Ohio, 2 days a week.  Dick’s passion in life was sharing his Jesus with others.
Calling hours are from 3:00 to 5:00 p.m. on Sunday at Calvary Baptist Church.  Pastors Jeff Willetts and Kenneth Dady will officiate a funeral celebration at 5:00 p.m. on December 27, 2020. Graveside services will be 10:00 am on Monday, December 28, 2020 at Highland Memorial Cemetery with Military Honors provided by the Logan County Veterans Honor Guard. Due to state Covid-19 pandemic guidelines, attendees are asked to be symptom free, maintain social distancing and wear a facial covering.
Memorial contributions may be made to Calvary Baptist Church Missions.
Arrangements are in the care of Shoffstall Funeral Home, Lakeview. Condolences may be expressed at shoffstallfuneralhome.com.
Post Views: 680