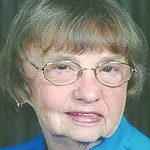 She was born in Urbana, on July 4, 1932, the daughter of the late John and Ruth Ann (Schooler) Steinberger. Her mother Ruth died when Louanna was just a child, and her father John was remarried to Sylvia.

Louanna married J. Lynn Calland and he preceded her in death in 1985.
After Lynn’s death she spent her summers at the summer family cottage in Mackinaw City, Mich., which her father built in the mid 1950’s and she worked at the Mackinaw Clothing Store seasonally for many years. She attended Denison University briefly studying Psychology before getting married and becoming a homemaker and raising two children.

Louanna previously resided on Calland Road, West Liberty and on Runkle Road in St. Paris which was her childhood home. She then moved to the Green Hills Community and resided there for the past 15 years. She was a member of the First Presbyterian Church in Urbana where she was in the choir.

She loved performing in the “The Millennium Melodears” in Bellefontaine and was in the “Kitchen Band” at Green Hills where she danced in her “Golden Slippers.” She was a big hit at several of the grandchildren’s weddings where she lit up the dance floor and had no problem showing the youngsters how it was done. She enjoyed life, but the things that really made her smile were her grandchildren, Baileys in her coffee, and being at the summer cottage. She never lacked spunk and is now dancing on the “big stage”.

A private family memorial will take place at a later date with burial in Fairview Cemetery, West Liberty.

Eichholtz Daring & Sanford Funeral Home, West Liberty, is honored to serve the Calland family and encourages anyone to share a fond memory or message of condolence at www.edsfh.com.