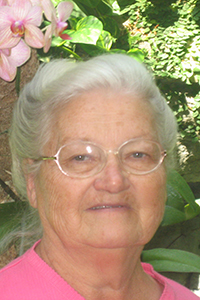 She was born February 20, 1935 in New Bremen, Ohio the daughter of Roscoe and Lillian (Bushman) Egbert and they are deceased.

She was married to Allen Kuck and they divorced, but remained close friends; Allen passed away May 23, 2019.

Along with her parents she was preceded in death by daughter-in-law, Wilma Kuck and granddaughter, Crystal Kuck and two sisters, Brunhilda Wittenbrink and Norma Mumaw and two brothers, Adrian Egbert and Alvin Egbert.

Janet was a 1953 graduate of Anna High School. She was a homemaker and raised her children on their rural family farm. Janet loved to plant a large garden and enjoyed canning and freezing food in preparation for winter.

She was a vendor at the Sidney Farmer’s Market for many years selling her delicious cookies, angel foods, cakes, pies, noodles, homemade ketchup and produce. Later, she enjoyed going to auctions and selling antiques and items at flea markets. Janet’s favorite annual flea market trip was to the Tri-State Gas and Engine Show in Indiana. She was of the non-denominational faith.

Funeral services will be at noon Friday, June 11, at Salm-McGill and Tangeman Funeral Home with Delmar Stockwell and Duane Topinka. Interment will follow at Shelby Memory Gardens, Sidney.

Friends may call on Friday June 11, from 10 a.m. to noon at Salm-McGill and Tangeman Funeral Home in Sidney.