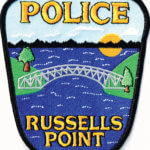 A concerned citizen contacting law enforcement Christmas Eve and a subsequent traffic stop initiated by the Russells Point Police Department resulted in a safe and happy holiday reunion for an out-of-state family.
Russells Point officers were dispatched about 10:30 p.m. Friday to the area of U.S. Route 33 to look for a vehicle traveling westbound from State Route 117. The caller was concerned because the vehicle was unable to maintain its lane or speed.
The caller followed the vehicle until officers were able to get behind it and initiate a traffic stop on a 2013 Kia SUV driven by Donald Echols, 58, of Springfiled, Ill.
During the course of the stop, officers learned Echols had been reported missing by his family members. Echols, who is disabled, was reported missing when he did not arrive at his destination in Indiana earlier in the day.
Arrangements were made to park Echols’ vehicle in a safe location and for him to stay in a room at the Super 8 Bellefontaine, while he waited for family to make the more than six-hour drive to reunite with him on Christmas Day.
The hotel stay is of no cost to Echols or his family thanks to the generosity of Lutheran Community Services of Bellefontaine.
Officers of the Washington Township Police Department assisted at the scene.
Post Views: 264

‘Not So Bad Art by Good People’ Contest returns