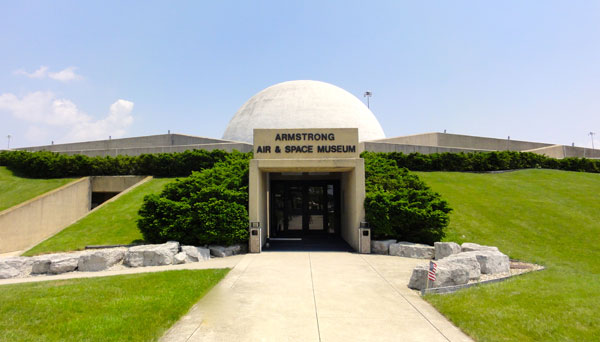 WAPAKONETA – Neil Alden Armstrong was born Aug. 5, 1930, on his grandparent’s farm just outside the city limits in Wapakoneta. Now 90 years later, the museum that bears the famous aviator’s name is celebrating the legacy of the first man on the moon.

The museum is unveiling its newest donated artifact, a Learjet 28 Longhorn that Armstrong set five world records in on its debut flights in 1979.

The Learjet 28 will be flying off for its final adventure from Allentown, Pa., to Neil Armstrong Airport in New Knoxville.

While the landing is a private event with limited access, the museum has scheduled the plane to fly over the museum at approximately 10 a.m. Aug. 5 for guests of the museum to watch and take pictures, weather permitting.

To further honor the arrival of the Learjet 28, the museum will be taking 28 percent off that day’s admission.

“This Learjet represents a piece of Armstrong’s history that is seldom talked about or mentioned,” says Museum Executive Director Dante Centuori. “With this addition to the museum, our organization can finally complete the narrative of Neil Armstrong and his life-long fascination with aviation.”

For the jet’s concluding flight before officially being retired, it will be flown by yet another Ohio astronaut, (Colonel USAF, RET.) Greg H. Johnson, who flew on Shuttle Missions STS-123 and STS-134.

The museum and its Board of Directors send expressed their appreciation to the donor, Kevin Hayward, who is currently the CEO of Ox Industries. Because of his donation, the museum can further the story and legacy of Neil Armstrong.

“After becoming the first man on the Moon in 1969, Armstrong lived another forty years and many guests of the museum are curious as to how Armstrong lived them,” explained Logan Rex, exhibits specialist. “This aircraft can fill in some of those questions and show that, while Armstrong did retire from NASA quite early, by no means did he retire from the skies.”