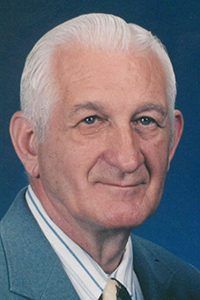 Jacob G. Derksen, “93” of Tipp City, was welcomed by Jesus and The Heavenly Hosts into Eternal Glory on Sunday, September 12, 2021, surrounded by his loving family.

Jake was born November 15, 1927 in South Vienna, to the late Peter and Antje (Mooij) Derksen. On July 23, 1950, in Bellefontaine, he married the love of his life, Jacqueline Jeanne McQueen, who preceded him in death on February 27, 2021.

Jake loved The Lord and attended Landmark Baptist Church for many years. Jake was drafted into the Army and honorably served his county in the Korean War, followed by six years in the Army Reserve. He was retired from NCR after many years of dedicated work and later retired from Dayton Coca Cola.

He was active in many community services, including being a Scout Master for the Cub Scouts, Sunday School Superintendent, long-time member of a fishing club and small engine business. Jake enjoyed spending time with his family and traveling. He was an expert painter, mechanic, and all-around handyman. Jake especially enjoyed the outdoors and took special pride in caring for his home and property. Wearing his suspenders and ball cap, he would very often be caught outside on his tractor mowing his three acres of grass. Jake was a loving husband, father, grandfather, great grandfather, brother, uncle and friend. He will be deeply missed by all who knew him.

A Funeral Service will be held Friday, September 17 at 1 p.m. at the Solid Rock Baptist Church, 1470 W Sandusky Ave., Bellefontaine. Visitation will be from 11 a.m. until the time of the service Friday. Burial will take place in Zanesfield Cemetery following the service.

Memorial Contributions may be made to a charity of the donor’s choice.