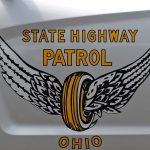 William Dixon, 44, of Bellefontaine, was transported to the OSU Wexner Medical Center by CareFlight helicopter for treatment of non-life threatening injuries following a crash Monday afternoon.

Troopers of the Marysville Post of the Ohio State Highway Patrol are currently investigating the injury crash involving Dixon’s SUV and a semi tractor-trailer on U.S. Route 33 in Jefferson Township.

Isse was treated at the scene by Bellefontaine EMS.

The Ohio State Highway Patrol also was assisted at the scene by Tri- Valley Fire and EMS, the Ohio Department of Transportation and Hogan’s Towing.

Alcohol is not suspected as a factor in the crash. The occupants of both vehicles were found to be wearing their seat belts, troopers said.

The patrol remind motorists to maintain a safe distance between vehicles while traveling.