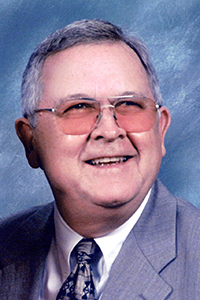 On May 12, 1935 Phil was born to the late Edwin E. and Lula K. (Johnson) Moffitt on a farm in Middleburg, OH. Phil graduated from West Mansfield High School and completed two years at the Ohio State University. He also served two years in the U.S. Army serving in Korea.

Phil worked at Bellefontaine Examiner, Columbus Dispatch, and thirty-three years at Eaton Corporation, working in the sales and purchasing department. Phil also sold real-estate in Marion for twenty-five years. Phil knew about everyone in Marion, he was very friendly and out-going.

He enjoyed dining out every week with the Pleasant “bike club,” this was a great group of friends.

Former president of Marion Industrial Club, Elks, Jaycee’s Marion Evening, Pleasant Lions Club, Gyro Club, and Chamber of Commerce Ambassadors Club of Marion. He was also a board member at the YMCA and Mental Health Board.

In addition to his parents Phil was preceded in death by his brothers: Byron and Denton Moffitt.

If so desired, memorial contributions may be made to the Epworth Church Choir or a charity of your choice.

Visitation will be held Wednesday, November 30, from 4 to 7 p.m., at Snyder Funeral Home, Denzer Chapel, 360 E. Center Marion, OH 43302. A funeral service will be Thursday, December 1, at 1 p.m.; with an hour visitation prior with Pastor Jennifer Bass and Pastor Dan Kiger officiating. Burial will follow at Marion Cemetery.

Snyder Funeral Homes, Denzer Chapel is honored to serve Phil’s family and online condolences may be expressed via SnyderFuneralHomes.com.