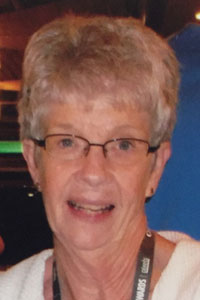 She was born Oct. 30, 1942, in Zanesfield, the daughter of Gerald B. & Sylvia (Stevens) Watkins. Peggy loved spending time with her family and grandchildren, especially attending their sporting events. She also enjoyed gardening flowers and vegetables.

Before her retirement form Walmart, Peggy was passionate about Baton Twirling. She was an accomplished Baton Twirler and was a judge at the National Baton Twirling Championships. She was awarded the State Champion at the age of 17. She served as the Baton and Flag Corp advisor for both Riverside High School and Indian Lake High School for many years. She was a member of the National Academy of Accredited Twirling Teachers; Ohio NBTH Judges & Teachers Assistant, as well as the International Judges Academy. She was the Director for the Blue Jacket Baton & Drum Corp, Rushsylvania Rocketts and Trojan Baton & Drum Corp in London, Ohio. She also taught many students privately in Logan county and surrounding areas. Peggy also appeared several times on Television with the Jack Sharic School of Dance.

She was preceded in death by her husband, Carl M. Trout in 2010.

Funeral services will be at noon Thursday, Jan. 23, at Jennings Farley & Seeley Funeral Home & Crematory, 5591 S. US Route 68, West Liberty, Ohio 43357. Visitation will be from 10 a.m. until time of service. In lieu in flowers, contributions may be directed to Ohio’s Hospice of Dayton or the Alzheimer’s Foundation.

E-mail condolences may be expressed at www.jenningsfarley.com.