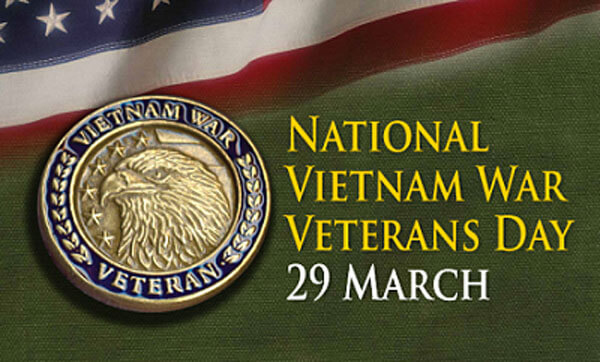 What is it? A day first established by President Obama in 2012 to remember the end of the Vietnam War, and later signed into law on March 28, 2017, by President Trump, making it an annual event to remember and reflect on a bitter period in this Country’s past.
When is it? Tuesday, March 29, 2022. However, it will be observed locally on Saturday, March 26, in Veterans Plaza, north of the Logan County Courthouse at 10:30 a.m. In the event of inclement weather, the event will be moved to April 2.
This year, the Vietnam veteran to be recognized will be Harley James, who served in Vietnam from September 1968 through September 1969.
Why is it? The Vietnam War ran from June 1, 1954, when the United States first started sending troops into Vietnam covertly. These troops were the Army’s Green Berets, who were to act as advisers to assist the South Vietnamese military in their fight against Communist North Vietnam forces, whose aim was to unite the whole country around one flag.
The war went “hot” for the U.S. on Aug. 5, 1964, when North Vietnam gunboats fired on a U.S. destroyer in the Gulf of Tonkin.
President Johnson sent in 3,500 Marines on March 8, 1965, and by December of that same year, there were 200,000 U.S. service personnel “in country.”
Over the next 10 years, more than 2.5 million Americans would join this deadly alumnus, including 7,000 female nurses who served with distinction and honor well beyond their numbers. The war ended April 30, 1975.
During the Vietnam War, there were more than 153,303 U.S. service members wounded in action, 58,286 killed in action, 1,645 missing in action and between 725 and 837 prisoners of war. For some, the war isn’t over yet.
For those who served their time and returned to the “States,” the war was here waiting for them, in the form of antiwar protesters chanting hate slogans and hurling insults at service members, who were only obeying the law and following the instructions of the leaders of their country.
There were those returning who agreed with the hecklers, feeling what they did in the name of war was disturbing and the things they saw were obscene. This was a period where the country was split, the likes of which were only exceeded by the Civil War in the 1860s.
Twenty percent of the current population wasn’t born yet during the Vietnam era, so it is important that they be exposed to what their parents and grandparents experienced — to give them a sense of this country’s past. Because the war is still with us in the fact that 390 Vietnam veterans are dying every day, mostly from cancer as a result of their exposure to “Agent Orange,” a defoliant used extensively in an attempt to deprive Viet Cong coverage for their guerrilla activities.
Past Logan County Vietnam veterans who have been recognized for their service are: William “Bill” Arnold, U.S. Army; Gary Homan, U.S. Marine; Mike Brinkman, U.S. Army; John Hortan, U.S. Army; Daniel Greene, U.S. Marine; Dennis Fry, U.S. Army; Fred Brackney, U.S. Air Force; and Jon Mikil Kilgore, U.S. Marine.
We honor these men for their service. When receiving their flag, they often make the statement that they are “receiving it, not for themselves, but for all Vietnam veterans, especially those who returned in a coffin.”
These ceremonies have been conducted annually since 2013. We hold these ceremonies naming a particular veteran, that is true, but in fact they are held to recognize all Vietnam veterans. What we hope is that deep down inside each veteran who is watching the ceremony can say, “That is for me and what I did when my country called on me to serve.”
Any honorably discharged veteran who served in Vietnam is eligible to be nominated for the public recognition. Anyone wanting to nominate a veteran for recognition may contact Russell Strayer through the Harold Kerr Post of the American Legion, Bellefontaine.