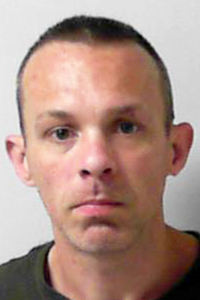 Deputies of the Logan County Sheriff’s Office report a Lakeview man was arrested for a second-degree felony count of felonious assault during a domestic incident at his residence just a short time after he was arrested for a separate impaired-driving rollover crash late Thursday evening.

Tommy L. Slagle, 39, of 13253 State Route 720, also was charged with operating a vehicle under the influence of alcohol and/or drugs, domestic violence and having weapons under disability. The domestic incident reportedly involved a firearm.

In the crash about 11:30 p.m., Slagle reportedly was operating a southbound 2006 Honda Civic on State Route 235 near County Road 13 and went off the right side of the road, overcorrected, and drove back into the southbound lane of travel.

His vehicle then went sideways across both lanes of travel and off the left side of the road, striking a ditch sideways, which caused the vehicle to go airborne and overturn several times before striking a fence and coming to rest in a field.

Damage was heavy to the car, which was towed from the scene.

While speaking with Slagle at the scene, deputies said he was unsteady on his feet and was slurring his words. He told deputies that he was prescribed Subutex and Adderall.

He submitted to field sobriety tests performed by deputies, and also was checked at the scene by Indian Lake EMS personnel, who did not observe any serious injuries.

The defendant was placed under arrest and transported to the Logan County Jail, where he submitted to a urine test, with results pending. He was cited for driving under suspension and failure to control and released to a sober party about 1 a.m. Friday, deputies said.

However, about 1:50 a.m., deputies responded to his address on a report of a domestic dispute between Slagle and his wife and his son, age 20.

Slagle and his wife reportedly had been arguing about Slagle crashing their vehicle. The defendant reportedly put his wife in a chokehold style headlock and started to strangle her. The son then intervened, and said his father threw him into a door frame.

The son said he contacted law enforcement and it was at that time that his father would not let him leave the home. Slagle allegedly threw the 20-year-old to the floor, causing the son to hit his head on a table and leaving a mark on his head.

Deputies also said his wife sustained a broken tooth in the incident.

The wife and son described Slagle as exiting the residence with a pump action 12-gage shotgun, which deputies recovered in a woodline south of the home.

Slagle was placed under arrest once again and transported to the Logan County Jail.