The tragedy in Uvalde, Texas, has schools once again considering ways to make their students safer. With that in mind, the Benjamin Logan Board of Education held a special session Monday night to vote on a resolution to train an armed response team. And while the board unanimously approved the resolution, they know there are hurdles ahead. They also emphasized this resolution only allows training.

Board member Mark Himmeger stated, “I want to make it clear we didn’t vote tonight to put guns in the school.”

Still, Logan County Sheriff Randy Dodds considers this an important and critical first step. “I think Benjamin Logan is a soft target out here in the middle of nowhere,” he said. “It happened in West Liberty, so we have to think about these things.”

Before making the decision, the board—led by Vice President Karen Dill as President Chris Larsen was out due to illness—engaged in further discussion and gave the public time to comment. Board member Scott Spriggs pointed out how this would add a third layer of protection next to security officers (SRO) and building improvements. And Dill asked if having an SRO in each building would help.

“I don’t know if it’s enough,” Dodds replied, “but it’s better than just one.”

In response, John Scheu, BL school superintendent, said they have the funds to have two new SROs—meaning one in each building—before school starts. These officers would work on the same schedule as students, all 166 days.

“I’m convinced an armed presence will make a difference,” Scheu said. “These uniformed security officers have built up such a strong relationship with these kids.”

The training Dodds proposes is equal to what his staff receives. However, they are still putting the curriculum together, after which it will need to be approved by the state. Then school staff who are interested in the training can apply on a volunteer basis. No one will be forced to participate. These volunteers will be carefully vetted before moving forward. The board also discussed the possibility of training all staff in simple self-defense tactics.

Before taking the vote, the board heard from community members Bobbi Smith and Lance Predmore, who stated he was 100 percent in support of the plan. “I think our community can be proud for setting a standard,” he said. “I don’t want guns in school any more than you do, but I have a responsibility as a father to protect my children.”

Predmore concluded with a Benjamin Franklin quote: “By failing to prepare, you are preparing to fail.”

Dodds shared his concern in this regard from a position of seeing more mental health issues in Logan County, dealing with more drug problems, and finding more guns in the cars they pull over. “Yes, we can ‘what if’ it to death,” he stated, “but does anyone have a better option? I want to sleep at night, and I want to do this right.” 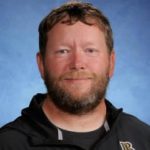 • In additional school board action, they accepted the resignation of Kara Wenger and hired BL football coach Jeff Fay as the new high school assistant principal under a two-year limited contract. He will continue as the head football coach for the 2022-23 school year as there’s nothing in board policy that states an administrator can’t be a head coach.