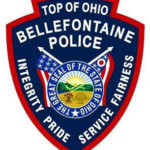 Ibtisam H. Knupp, 50, of 547 E. Columbus Ave., Apt. 20, was arrested Saturday after her neighbors reported she threatened to set fire to the apartment complex.

Officers of the Bellefontaine Police Department were called to Colonial Arms Apartments around 1 a.m. and met with two witnesses who reported Knupp’s threats and observing her attempting to set a fire near fence on the west side of the property.

The suspect, who was lodged in the Logan County Jail for an aggravated menacing charge, had been drinking alcohol but denied any wrongdoing, officers report.

An officer found evidence of an attempt to set a fire along the fence.

Keith A. Shepard, 39, of 325 West St., was charged possession of drugs, possession of drug paraphernalia and possession of marijuana after a 4:30 p.m. traffic stop Friday.
An officer on patrol observed Shepard’s car did not have brake lights as it came to a stop at Albert Street and Florence Avenue. The officer, who handles the department’s canine, initiated a stop on Florence Avenue and noted, upon contact with Shepard, the motorist was visibly nervous.

When confronted with the possibility of the drug sniff of his car, Shepard admitted to having hallucinogenic mushrooms and marijuana in the car.

He handed over a bag of the mushrooms and a bag of marijuana. A search of the car found a pipe used for smoking crack cocaine and a spoon with burn marks.

He was lodged in Logan County Jail.

Mateo J. Rosales, 39, of 102 N. Detroit St., was charged with public intoxication and criminal trespassing after he refused to leave the Beer Vault, 149 W. Columbus Ave., around 12:35 a.m. Saturday.

Officers arrived on scene to find him outside yelling racial slurs at a man. He was placed in handcuffs at which time an officer noted a strong odor of alcohol coming from the suspect.

The business manager told officers Rosales was banned from the establishment several weeks ago and was told to leave when he entered and stepped up to the bar. He refused but was forced out. Once outside, he began to yell at other patrons.

Officers report he continued to be verbally abusive towards them while en route to jail.

He became aggressive with jail staff and was placed in a restraint chair.

Aaron D. Snyder, 32, of 331 E. Auburn Ave., was charged July 21 with operating a vehicle while under the influence of alcohol and/or drugs after his neighbors reported he was repeatedly revving the motor of his pickup truck around 11 p.m.

Officers arrived to find him standing by the open tailgate of the pickup. An odor of alcohol was detected by officers as they spoke with him. They also noted an open cold can of beer on the tailgate.

He taken into custody after he refused to participate in sobriety testing.

The tailpipe and motor were both hot to the touch, officers reported, and there was evidence of fresh burnout marks on the driveway and grass and sod damage along the drive. Rocks and gravel were thrown from Snyder’s property into the street and there was grass and dirt on the pickup’s rear tires.

Officers noted Snyder has an OVI conviction from 2008 which led to a charge of refusing to take sobriety tests.

He was lodged in jail.

• Michael R. Camper, 38, of 116 W. Brown Ave., was charged July 22 with physical control of a vehicle while under the influence of alcohol and/or drugs and having an open container of alcohol in a motor vehicle.

At 5 p.m., witnesses reported a man passed out in the driver’s seat of a car. Officers arrived and observed personnel from the Bellefontaine Fire and EMS Department attempting to rouse Camper. they were successful and removed him from the car.

He was unsteady on his feet and needed assistance to walk to the squad. He was transported to Mary Rutan Hospital for treatment.

An open bottle of alcohol and a THC vape cartridge were found in the car.

• Carl J. Stumpf, 43, of 850 Bonnie Lane, Apt. 510, was charged Saturday with physical control of a vehicle while under the influence of alcohol and/or drugs.

He was found around 9:45 p.m. passed out in the driver’s seat of his parked car in the 100 block of west Columbus Avenue. Officers detected an odor alcohol on his breath and observed several signs he was under the influence of alcohol even though denied drinking alcohol that evening.

He refused to participate in sobriety testing or provide a breath sample for analysis.

Officers are reviewing surveillance footage of a July 21 theft in the hopes of identifying a male suspect who walked out of Tractor Supply Co., 1651 S. Main St., around 1:40 p.m. with a $515 generator.

• Security staff at Walmart, 2281 S. Main St., have provided video surveillance footage of two women who failed to pay for all of the merchandise in their shopping cart around 12:50 p.m. July 22. The women, accompanied by a child, reportedly drove off in a white GMC sport utility vehicle.