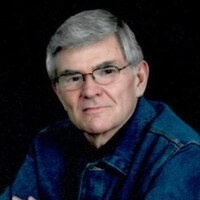 William E. “Bill” Beltz, 79 of Bellefontaine, left his earthly body Sunday morning, Nov. 24, 2019, at Logan Acres and met his Lord and Savior face-to-face after a long 15 years of battle with cancer.

He was born June 8, 1940, in Kenton to the late William I. and Marcena (Armentrout) Beltz. On April 17, 1960 in Bellefontaine he married Sharon K. Parker. They were married for 59 years, and she survives.

Bill graduated from Zanesfield Monroe in 1958. He was known for his quick wit and corny jokes. Bill loved his family, prayed for them faithfully and always said that God had truly blessed him.

Bill wore many hats in his lifetime: he worked in retail for many years at Montgomery Ward, Bush Electric, and Beltz TV & Appliances. He was involved in his daughters’ PTA’s throughout elementary and middle school, he was on the Board of Public Affairs in Russells Point, and was a police officer in Lakeview for 13 years.

He and his wife were distributors for Original Lincoln Logs. Bill also built and designed his own log home with the help of family and friends. He retired from TRC in 2003 as a purchasing agent.

Bill loved his Savior. Bill gave his heart to Him on Feb. 21, 1972. He served Him faithfully over the years as a Deacon, youth leader, Awana Commander, Sunday School teacher and Superintendent at Calvary Baptist Church. He faithfully memorized scripture for many years and God used it mightily in his later years. He was a man of prayer and faithful witness for our Lord.

Bill will be greatly missed by his family and friends.

We are thankful for God’s promise that we will spend eternity together.

We want to personally thank Interim Hospice Care and especially the staff at Logan Acres and the loving care that he received there over many months.

A funeral service will take place Friday, Nov. 29, 2019, at noon at Calvary Baptist Church. Visitation is from 10:00 a.m. until the time of service. Burial will take place in Huntsville Cemetery following the service.

In lieu of flowers, memorial contributions may be made to Samaritan’s Purse, PO Box 3000, Boone, North Carolina, 28607.