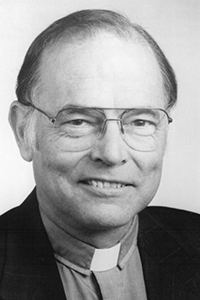 Husband, father, grandfather, friend, pastor, professor, mentor and missionary, the Rev. Dr. Jerry Lew Schmalenberger’s humor and zest for life will be remembered long after his death on April 25, 2022.

Pastor Jerry, as he liked to be called, passed away at the age of 88, after a life of service to the Lutheran Church. He was the pastor of five Lutheran congregations in Springfield, Bellefontaine, Tiffin and Mansfield, Ohio, and St. John’s in Des Moines, Iowa. He was then elected President and Professor of Practical Theology atPacific Lutheran Theological Seminary in Berkeley, California 1988-1996.

After retirement he taught for 16 years as a Global Mission Volunteer for the Evangelical Lutheran Church in America. He was also the author of thirty-five books and many articles.

Born at home in Greenville, Ohio, on Jan. 23, 1934, the son of Harry Henry and Lima Marie Hormell Schmalenberger, he cherished vivid memories of his childhood with five years on their small farm.

He was president of his junior and senior classes, took part in football, coaching Jr. High basketball, debate, speech, and drama activities. This was the beginning of his life-long habit of multi-tasking.

Pastor Jerry graduated from Wittenberg University in Springfield, Ohio, with a B.A. in 1956; the on-campus HammaSchool of Theology with Master of Divinity 1959 and Doctor of Ministry in 1976. Wittenberg also awarded him an honorary Doctor of Divinity degree in 1983.

He was pre-deceased by his parents, older sister Jane Ross and sons Arthur Eubanks and James Schneider.

His Celebration of Life will be in Weaver Chapel of Wittenberg University, 200 West Ward Street in Springfield, Ohio, at 1 p.m. Monday, May 16. Reception to follow. His ashes will be placed in the Garden columbarium of Ferncliff Cemetery at Springfield, Ohio, near the campus. See other information at https://jerryschmalenbergermemories.weebly.com/