Levi M. Close, 20, of Cable, was charged with grand theft of a motor vehicle Sunday after a stolen vehicle from DeGraff was located in Shelby County.

Shelby County deputies had located Stalling’s 2016 GMC Yukon Denali. Close reportedly had been operating the vehicle, and had “passed out” behind the wheel when it was recovered.

Shelby County deputies also stated they believed the vehicle had been involved in an accident, as it had recent damage.

Stalling told deputies that he had been driving his vehicle the previous evening, and parked it at his residence shortly after midnight, with the keys inside and the doors unlocked. He said he never heard the SUV start up during the night.

Close told deputies that he had been in DeGraff the previous evening at a party and said he had consumed alcohol. He said he didn’t remember anything after that, except being woken up in the wrecked vehicle.

Shelby County deputies said Close was facing charges of operating a vehicle under the influence of alcohol and/or drugs, underage consumption and was cited for failure to control. He was lodged in the Logan County Jail.
Motorcycle reported stolen
Deputies responded about 1 a .m. Saturday to 7829 State Route 559, Zanesfield, on a report of a stolen motorcycle.
Edwin Orahood told deputies that an unknown subject entered his yard between 12:15 and 12:30 a.m. and removed his 1999 Harley Davidson Road King from the front yard of the residence.
Orahood said he was sitting inside his home when he heard a motorcycle outside of his home, but he first thought one of his friends was arriving at the residence. When no one came to the door, he went outside and found that his motorcycle was missing.
Animal incidents lead to crashes
Karol J. Klingelhofer, 87, of DeGraff, was cited for failure to control related to a non-injury crash about 10:45 a.m. Sunday.
Deputies report she was operating an eastbound car on County Road 58 near County Road 56 when she struck a traffic barricade placed at the edge of the road. The driver told deputies she had been distracted by a large bird that she thought might crash through her windshield.
Damage was light to the car and the driver was wearing her seat belt.
• Ezrah K. McGue, 16, of Rushsylvania, was cited for failure to control as a result of a non-injury crash Sunday evening in DeGraff.
Deputies report she was operating a northbound sport utility vehicle on south Mill Street and swerved to miss a cat in the road. Her vehicle went off the right side of the road and struck a Sprint telephone pole.
Damage was moderate to the SUV and the driver was wearing her seat belt.
• Deputies also responded to a hit-skip crash about 12:45 a.m. Sunday.
A westbound car operated by an unknown driver on State Route 273 near County Road 97 reportedly went off the right side of the road, striking a Logan County Electric Cooperative pole. The vehicle sustained heavy damage and was towed from the scene. 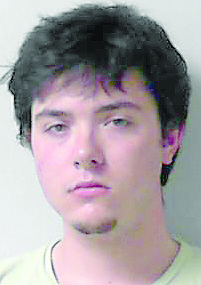 With blended learning under way, district examines next steps for school year