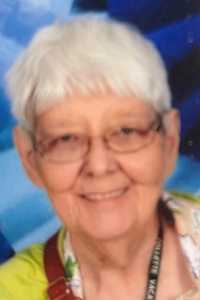 Ruthella Louise Kelly, 91, of West Liberty, passed away on May 3, 2022. Ruthella was born on February 26,1931 to the late William and Ida Hiller. She is preceded in death by her husband Leo, brother Clarence and Edward Hiller.

Ruthella grew up on a farm near Dola. She continued her education at Capital University earning a BA in elementary education. After teaching in the Cleveland area a few years, she was honored in 1963 as one of the first class of Jennings scholars. She received her master’s degree in education from the university of Michigan in 1965.

While teaching in Ann Arbor, Michigan she married Leo Kelly. Following his retirement they moved to Lancaster, Ohio where she completed a 30-year career in education. She was very active in the Delta Kappa Gamma society chapter there.

She was very talented in creating cross stitch and other types of crafts. Her hobbies were playing the piano and organ, sewing, gardening, reading and collecting artwork, glassware, and other collectables.

Ruthella and Leo enjoyed traveling throughout the states, Canada, and Brazil. They moved to Ft. Myers, Fl, after her retirement. While there she enjoyed activities with yoga and became very competitive in dominos.

After Leo’s passing, she continued to travel going on cruises and she joined a tour group Beijing, China. After living through two hurricanes, she decided to move back to Ohio near her family. She resided at Green Hills assisted living for nearly 5 years.

A memorial service was conducted in the Green Hills community room, with Pastor Ken Neighoff officiating. Her ashes are buried in Saint Mary’s cemetery in Lancaster, Ohio.

We thank the Green Hills staff for the loving care she received while making the Inn her home. We also want to thank the Jennings Farley Funeral home for their care and kindness for our family.