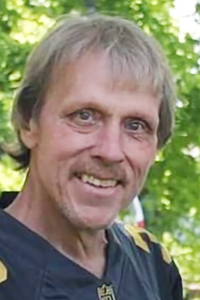 Ron was born on June 19, 1965, in Bellefontaine to Ronald and Pauline (Hagemann) Kensler.

He was a 1983 graduate of West Liberty Salem High and served in the Navy branch of the military before settling down to build and raise his family. He had built a successful tree and fence company, Boo Fence and Tree, nearly two decades ago, from ground up and loved managing the business, even through his determined battle against Cancer.

He was proud to have fathered 6 children who have gone on to give him 14 grandchildren (and all blondes, he enjoyed telling friends of this) and enjoyed fishing, hunting for wildlife and mushrooms, trapping, coaching Wrestling, watching Browns football and an occasional visit to the Hollywood Casino. For a period of time he raised five of his children single handedly, a time he would later recant as the best time of his life. From teaching his children the value of a job well done to instilling the upmost strength of good character into each of them, he handled all of this while also facing many battles that he always managed to overcome with the best of heart toward those he loved.

He would go on to teach many employees the fencing and tree business, from safely operating the chainsaw to driving fence posts, he loved helping others especially those who had faced their own trials and tribulations in life. In his later stages, he found and gave the upmost significance to leading others toward God. He helped do this with his grandson Trevor (aka Cliff) the past two years who was also his best buddy. Ron has spent everyday even through his battle with Cancer, teaching Trevor the ins and outs of the business, the importance of being a man of honor, and how to love selflessly with the upmost priority being on his relationship with the Lord.

Even when he was terminally sick, Ron showed love, forgiveness and compassion to his very last breath. He was not someone you could meet even briefly and ever forget, and he will be deeply missed and forever honored by those who loved him.

He was preceded in death by his baby brother Clifford Barton Kensler and his dearest uncle Don Hagemann.

The family would like to express our fondest thank you to the ICU Nurses at Memorial Health and the medical staff at the Ohio State James Cancer hospital, for the compassion and care given throughout Ron’s battle with Cancer.

Pastor Chris Starbuck will officiate a Celebration of Life Service at 11 a.m. Saturday, September 24, at Jennings Farley & Seeley Funeral Home and Crematory 5591 US Route 68 South West Liberty, Ohio 43357. Burial will follow at Fairview Cemetery in West Liberty. Visitation will be from 3 to 6 p.m. Friday at the Funeral Home.