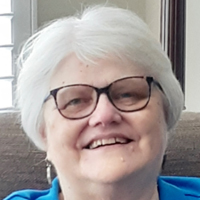 Mary Ann Settlemire died on June 23, 2022. She was born in Bellefontaine, Ohio, on November 10, 1945 to Robert Nelson and Alice (Garlow) Settlemire.

For most of her professional life, Mary Ann worked at the American Association of Community Colleges retiring after 32 years of service in 2009 as the Director of Meetings and Council Relations, and Assistant Vice President, Professional Services.

Mary Ann was a long-time resident of Capitol Hill in Washington, D.C., and devoted member of St. Peter’s Church. She chaired the committee for the 175th Anniversary Celebration of the parish and was instrumental in the inception of St. Peter’s annual Celebration of Ireland. An avid Washington Nationals fan, mystery reader and watcher of British TV programming, she also enjoyed designing and making unique greeting cards.

She is survived by cousins as well as numerous friends and colleagues.

She was predeceased by her parents and her brother, John Walter Settlemire, who died shortly after birth.

Funeral services will be held at St. Peter’s Church on Capitol Hill, Washington, D.C., on Saturday, July 9. There will be visitation at 9:30 a.m. followed by a Mass of Christian Burial at 10:30 a.m. Livestream of the service will be available on the church’s Facebook page, @SaintPetersDC. Inurnment will be at Calvary Cemetery in Bellefontaine, Ohio, at a later date.