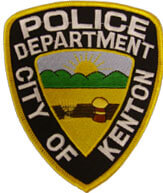 A wild chase through Kenton on July 4 and an offer to pay off a Kenton police officer has sent a man to prison for more than 12 years after he pleaded guilty to multiple charges in a case heard in Hardin County Common Pleas Court.

According to court records provided by Prosecutor Brad Bailey, Zachary Ty Spires, whose only address in the court records was that of the Multi-County Jail in Marion, reached speeds exceeding 70 miles per hour as he was pursued through Kenton. The chase covered at least 4.5 miles, the records indicate, and Spires drove a 2008 Mercedes Benz through at least 10 stop signs and seven red lights as he was pursued by officers from the Kenton Police Department and the Hardin County Sheriff’s Office.

During the chase, Spires drove off the road and into fields and almost struck pedestrians in an alley.

A cruiser from each department was damaged in the chase, the report continued. The car chase ended when Spires struck a pickup truck owned by Frank Haudenschield. Two people in the truck were not injured, the record indicates.

The suspect continued to flee the officers on foot. He ran through several occupied yards with the canine unit in pursuit before he was arrested.

As Spires was being transported to the KPD, he asked the officer, “Bro, if I said I’d give you ten thousand dollars right now, to let me walk away,” according to the records.

The officer quickly declined the offer, the report said.

A search of the vehicle resulted in the recovery of 22 firearms which were taken from Spires’ maternal grandmother’s boyfriend in Hancock County. They also found ammunition and several knives belonging to the boyfriend valued in excess of $7,500.

In plea negotiations, the multiple counts against Spires were narrowed to two counts of vandalism and one count each of failure to comply with the order or signal of a police officer, having weapons while under disability, bribery, receiving stolen property with a gun specification and criminal damaging or endangering.

Judge Scott Barrett sentenced Spires to 90 months in prison with a year added for the gun specification, for a total of 8.5 years. He was ordered to pay restitution of $1,540.99.

But the incident occurred as Spires was on post-release control supervision from a case in Seneca County. Violation of that agreement brought an additional prison term of 1,605 days in prison, which equals four years and 145 days. That term is to be served first, with the mandatory year for the gun specification, before the 7.5 years from the non-mandatory offenses in the case.