Let the countdown begin! Though it might seem strange to say that almost two years out, the phenomena to take place on Monday, April 8, 2024, will only come around once in a lifetime for most of us. Many people, in fact, have already started preparing. And Logan County has every intention of making it memorable.

Just how unique is this event? The last total solar eclipse to traverse Ohio skies was more than 200 years ago in 1806, and the state won’t see another one until 2444. Though the most recent eclipse in North America was in 2017, where it was visible in parts of Kentucky, the moon won’t cover the sun here again for another 23 years.

With that in mind, people representing government, law enforcement, business, health and education services in the community gathered at 1 Hunter Place, Bellefontaine, Tuesday morning to get things rolling. Why? Because when the total eclipse of the sun passes almost directly over Logan County, we’re sure to experience an influx of visitors.

The county could even see the population double over the days surrounding the eclipse, according to Colin Campbell, a planner with the Ohio Emergency Management Agency (EMA), who gave the group a rundown of what’s heading our way.

“People come from around the world to chase eclipses,” Campbell said. “Though it’s a one-day event, some will travel from all over to be there before and watch the moon (get closer).” 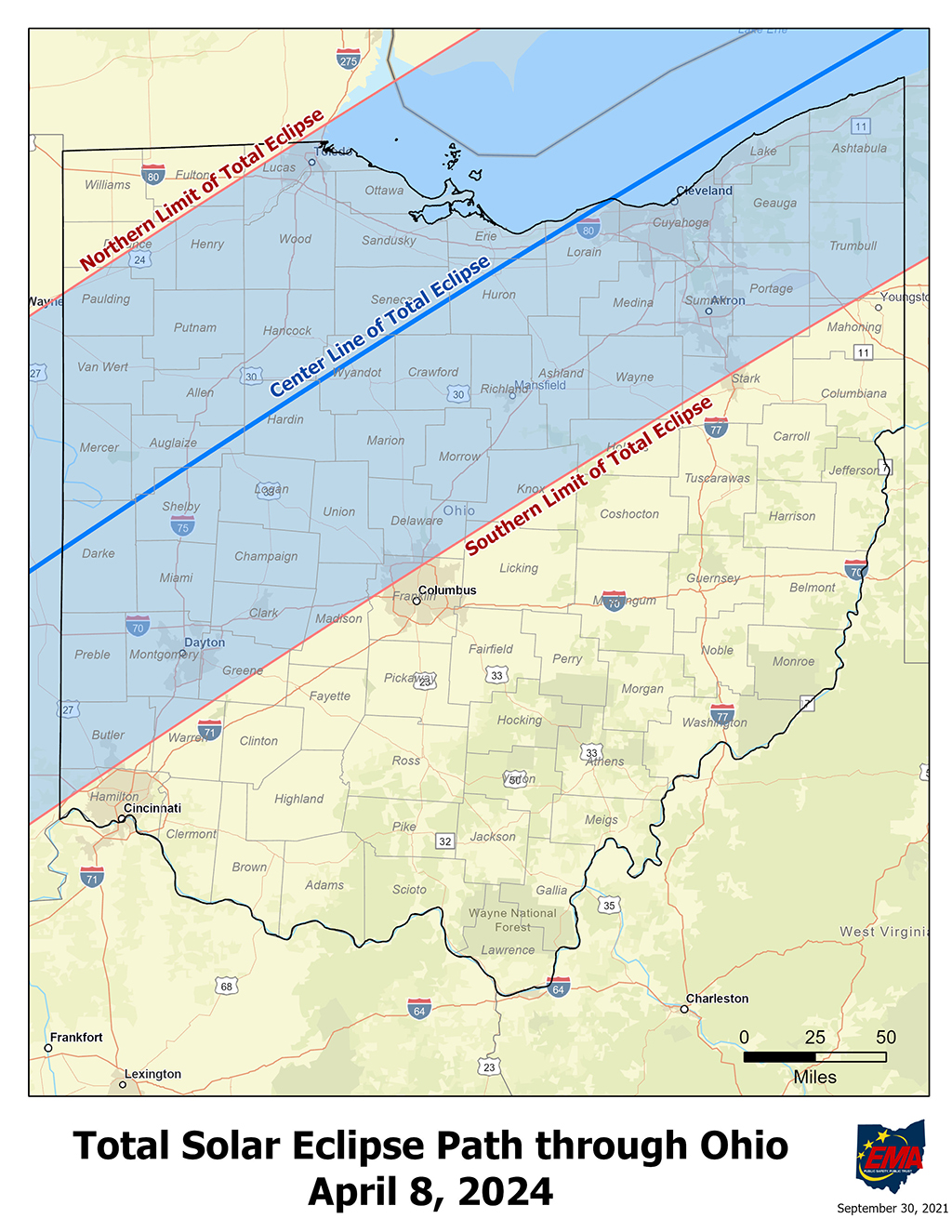 Campbell used Kentucky’s experiences in 2017 as a guide for what Ohio can expect. While we can certainly look forward to the educational opportunities and income generation, the negatives include the possibility of short-term food and gas shortages; an extreme amount of traffic, which could cause stress to the local infrastructure; and the demand it would put on hotels, restaurants, parks and entertainment facilities. Plus, with totality hitting right around the time most schools get out, it’s been recommended we keep the students at home for the day.

Still, for those who met Tuesday, the pluses outnumber the downsides. They consider this as an opportunity to showcase local culture, and the overall consensus was to promote Logan County as a destination location for the 2024 eclipse.

“If you can’t be in a totality area, you can’t get much closer,” Helen Norris, Logan County EMA, said. “Indian Lake is about two miles from the center line.”

The next step, according to Norris, is to create subcommittees to cover six areas: communications and operations, health and safety, transportation, resources and logistics, education, and one that combines viewing, lodging and local support. She also suggested holding another meeting in three months, then accelerating those gatherings as the date gets closer.

In the meantime, the county mayors will discuss the event at their July 20 meeting in West Liberty, and the education coalition plans to make it part of their agenda when they get together in August.

For more information or to get involved, contact Norris at the Logan County EMA by calling (937) 593-5743. You can also visit the Ohio government website at eclipse.ohio.gov.

Put A Lid on It promotes helmet safety

T.R. 115 bridge to close for replacement