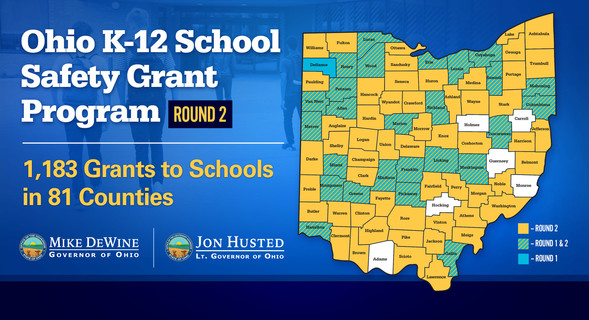 COLUMBUS — Ohio Governor Mike DeWine announced Tuesday at the Ohio School Safety Summit that more than 1,000 K-12 schools across Ohio, including each of the school districts in Logan County, will receive state assistance to pay for security upgrades that enhance the safety of students and staff.

House Bill 99, which was signed by Governor DeWine in June, created the Safety & Crisis Division to develop and provide training for school staff members whose districts opt to allow certain employees to be armed on school grounds.

DeWine created the Ohio School Safety Center in 2019. It is housed at the Ohio Department of Public Safety and works to assist local schools, colleges and universities, and law enforcement agencies to prevent, prepare for, and respond to threats and acts of violence, including self-harm, through a holistic, solutions-based approach to improving school safety.

Relating to the grants, DeWine announced that 1,183 schools in 81 counties will receive nearly $47 million in funding as part of his Ohio K-12 School Safety Grant Program.
Grants equal the amount requested by each school up to $50,000. Funds will be used to cover expenses associated with physical security enhancements such as security cameras, public address systems, automatic door locks, visitor badging systems, and exterior lighting.

“With the start of the new school year quickly approaching, we want students, staff, and parents to know that we care about school safety, and we’re working every day to make sure that rural, urban, and suburban schools alike have the safety and security resources they need,” Gov. DeWine said.

“Helping schools pay for important security improvements is just one component of our comprehensive school safety approach that also supports the mental wellbeing of our kids and the work of local law enforcement to prevent crime.”

The governor first launched the K-12 School Safety Grant Program in 2021 with an appropriation of $5 million in Senate Bill 310 of the 133rd General Assembly, which was awarded in May to 98 schools in 27 counties.

This year, the Governor and legislature partnered to increase the grant program by an additional $100 million with support from the American Rescue Plan Act. The 1,183 schools selected to receive funding each applied for but did not receive funds as part of the initial $5 million in grant awards.

The Ohio School Safety Center (OSSC), in partnership with the Ohio Facilities Construction Commission, will begin accepting applications in the coming weeks for the $53 million in funds remaining in the K-12 School Safety Grant Program. Schools that have not yet applied for funding or whose applications were ineligible in previous rounds will be given first priority.

The OSSC is also responsible for hosting the annual Ohio School Safety Summit, which takes place in Columbus this year from Aug. 2-4. Educational sessions include evidence-based threat assessment training that the OSSC and the Ohio Department of Education are offering for free to every school in the state.

In addition to regional trainings, staff at Ohio’s Educational Service Centers will bring this free training directly to Ohio’s school districts in the future.