All eyes were on the Kinney sisters as they swept through and won many of the categories in which they competed Sunday afternoon at the Logan County Junior Fair poultry show.

Sister Alivia Kinney won first and third in her class for all other variety bantam, and second in feather leg and game bantams.

The three sisters belong to Cool Clovers 4-H club and attend Indian Lake Schools where Alivia will be in seventh-grade, Alex will be a freshman, and Allison will be a senior. Together, the three certainly know their poultry. Allison plans to attend college and wants a degree in Agriculture Communications.

“For 11 years I have put in a lot of hard work, time and effort. It has paid off once again,” she said. 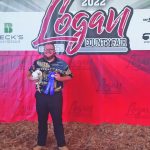 Marshall plans to attend Rio Grande College and pursue a career in welding. He was excited to win Grand Champion Roasters, noting he had won two years in a row, and said “a third time means the world to me because I wanted to go out with a bang.” 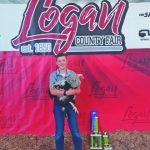 Dawson is a member of the Showin’ & Growin’ 4-H club. To watch him in the arena, it is clear this young man enjoys his chickens.

Isabel Henderson and Kendra Kennedy held their own in their respective classes throughout the afternoon.

Isabel, who will be a high school junior in the fall, won Grand Champion Turkey and Reserve Tom. The Manes & Reins 4-H Club also won first in her class for Roasters.

When asked about her Grand Champion win, she said, “I won once when I was younger, so to secure the win a second time around feels great.”

Kendra, a member of the Friendly Farming 4-H club, won Champion Tom and Reserve Grand Champion Turkey. She will be pursuing a career in early childhood education in the fall at The Ohio State University.