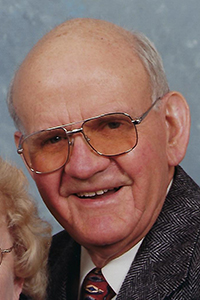 Joe Ford, age 88, of Rosewood, while in his family’s presence, passed into the arms of Jesus on Sunday, July 18, 2021 at Wilson Memorial Hospital, Sidney. He was born on December 21, 1932 in Rosewood, to the late William and Audrey (Donnal) Ford.

Joe married Jane Sprague on March 24, 1952 and she survives in Rosewood. Together they raised four children; Dan (Patti) Ford of Rosewood, Timothy (Fookloy) Ford of Boca Raton, FL, Rebecca (Michael) Wigginton of Indianapolis, IN and Steve (Debbie) Ford of Rosewood.

In addition to his parents, he was preceded in death by two sisters, Wilma Russell, Jane Ache and half brother Don Stanley.

He was a 1951 graduate of Rosewood High School. He was Service Manager for Ford’s Garage and owner since 1963. An officer of Rosewood Fire Department, he served as Chief for 50 years before retiring in 2015. He was also an EMT for Riverside EMS from 2003 to 2015.

Joe was a member of the Renewed Strength Church where he served as elder and was an ordained Christian Minister. He enjoyed missionary work in Haiti with his grandchildren.

In lieu of flowers, the family would like memorial contributions to go to the Mission’s Fund of Renewed Strength Church, P.O. Box 88, Westville, OH 43083 or to the Rosewood Fire & Rescue Association, P.O. Box 108, Rosewood, OH 43070.

Condolences to the family may be sent to www.shivelyfuneralhomes.com.