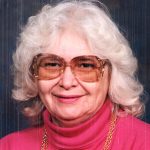 Janet Evelyn Anthony, 76, 7369 Foster St., Russells Point, formerly of Sidney, passed away on Saturday, Dec. 26, 2020, at 10 a.m. at Belle Springs Nursing and Rehabilitation Center, Bellefontaine.
She was born June 3, 1944, in Bellefontaine, the daughter of George Mason and Thelma Rutherford. She is survived by daughters, Lisa Feathers and husband Ted of Urbana; Yvette Zang of Amarillo, Texas, and two sons, Mark Slaybaugh and wife Julie of Russells Point, and Rodney Woodell of Sidney, and seven grandchildren and seven great-grandchildren.
She was a laborer at Copeland Corporation in Sidney. She was member of the Trinity Church of the Brethren in Sidney.
Funeral services will be at 10 a.m. Wednesday, Dec. 30, at Salm-McGill and Tangeman Funeral Home in Sidney with Pastor Earnie Jones. Burial will follow at Glen Cemetery, Port Jefferson. Friends may call at Salm-McGill and Tangeman Funeral Home from 9:30 a.m. until the hour of the service.
Memorial contributions may be made to the Port Jefferson Fire and Rescue and the Belle Springs Nursing and Rehabilitation Home in Bellefontaine.
Envelopes will be available at the funeral home. Condolences may be expressed on Salm-McGill and Tangeman Funeral Home’s web site at www.salm-mcgillandtangemanfh.com.
Post Views: 352