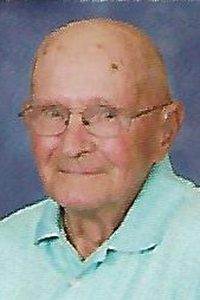 Floyd Richard Butts, age 92, life-long resident of Rosewood, Ohio, was born in rural Logan County outside Quincy, OH on January 20, 1930. He was the second of five children born to John Durward and Ethel Pauline (Buroker) Butts. As a 1948 graduate of Harrison-Adams High School in Rosewood he participated in many sports and was a proud member of the “Whiz Kids” basketball team.

After high school graduation, he attended Cedarville College and was a member of the 1948-49 basketball team that was the first Cedarville team to play in the NAIA National Tournament. Floyd was drafted into the Army and served in Korea from 1951 to 1953. After returning to Rosewood, he worked at and then managed X-Cel Feed Mill for 40 years. As an integral part of the farming community he, along with his father-in-law Henry Brown and then his son-in-law Kurt Traylor, provided supplies, feed, grain, and crop services to their neighbors with wonderful friendships established.

Floyd was an avid outdoorsman nearly all his life, hunting with his father, sons-in-law, and grandsons. His hunting trips out West with Charlie Moore and Chuck Valentine were highlights of his life.  He continued his sports participation in semi-pro baseball and basketball, and then fast pitch and slow pitch softball.  He was an active member of the Rosewood Volunteer Fire Department for several decades and served as Assistant Chief. A lifetime member of the VFW and Keith Cretors Post 148, he was also an active member of Rosewood United Methodist Church serving on many committees up until his death.

Floyd enjoyed watching three generations of his family participate in sports and other activities. And he and Marilyn also enjoyed traveling in their retirement years caravanning around the country making new friends.

Marilyn passed away on June 9, 2007, in their home. He was also preceded in death by his parents, step-mother Lodema (Piatt) Butts, his father and mother-in-law Henry and Lena Brown, sisters Bette Lattimer, Jeannette Heath, Janet Partington, brother Max Butts, and nephews Scott Partington, John Anthony Heath and James Heath. He is survived by many nieces and nephews.

For the last 14 years, Floyd and his best friend and companion, Freda Roesser enjoyed many travels and adventures together. Freda was his daily and loving support and she was especially helpful as his health declined.

Visits with the family will be Thursday, June 30, nat Rosewood United Methodist Church from 11 a.m. to 1 p.m., with service at 1 p.m.. Burial will follow at Rosedale Cemetery.