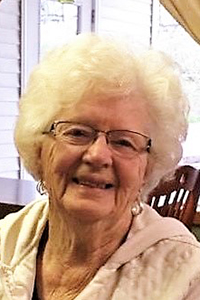 She was born on Thursday, May 5, 1927, in Logan County, to Henry Nelson and Carrie Verl Strayer Smith. Her Aunt Cleo Parker told her that it snowed on her birthday in May of that year.

She was preceded in death by an infant brother, William James, and an older brother, Frank Elmer (Jean) Smith.

On Dec. 2, 1944, she eloped to New Bern, N.C., to marry her beloved husband Robert D. “Bob” Hammond who was serving in the U.S. Marine Corps in basic training at Paris Island during WWII. They honeymooned at the Queen Anne Hotel and dined on fresh oysters and seafood. They were married for 55 years residing last at Indian Lake and are survived by four children: Michael (Cinda) Hammond of Fairborn, Steven (Joyce) Hammond of DeGraff, Robert S. (Rosemary) Hammond of Pataskala and Barbara J Henry of DeGraff,whom Donna had made her home with for several year; nine grandchildren, M Todd, Kyle, Alyssa, S Mark, Stephanie, David, Julie, Matthew and Derek and 18 great grandchildren.

Donna worked in shoe sales, as a telephone operator, real estate and Insurance businesses as well as a care giver for family members. She was a devoted, selfless, loving mother and grandmother who excelled in all she did. She loved to read and bake and was known for her pies, cookies and cinnamon rolls. She would sometimes eat her dessert first at dinner and no one ever left her kitchen hungry. She was a consummate worrier about her family and their biggest fan.

A family service will be held at a later date and interment at Philadelphia Lutheran Cemetery.

Arrangements are in the care of Shoffstall Funeral Home, Lakeview. Condolences may be expressed at shoffstallfuneralhome.com.