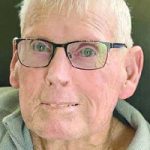 Daniel “Dan” J. Comer was called by his Maker into eternal peace on the beautiful afternoon of Wednesday, July 21, 2021; just one day after his 82nd birthday for which he proudly shared with his youngest granddaughter Esmé. He was home and covered in prayer and love by his family during his final moments on this side of Heaven.

Dan was born on July 20, 1939, in DeGraff, to Thomas E. Comer and Lena L. Snapp Comer. Both parents preceded him in death, as well as his older sister Marilyn Comer (Frank) Donnaker and his first-born son, David Alan Comer. He graduated Class President of DeGraff High School 1958. His first claim to fame was the title of “Top Scorer” in basketball for Logan County and he would remind his kids often with a grin that his title was earned before the introduction of the 3-point line.

Dan was many wonderful things: most notably, he was a sincere husband, an ever-present and positive father, a proud “PaPa” and overall; he was a vessel of unconditional love and optimism. He appreciated the gift of each birthday and never fussed over his age. He actively lived his 82 years on this earth including competitive barrel racing in his younger days, weekly tennis matches, fishing and hunting outings, regional and national trapshooting with family and closest friends, and finally ending his agile days with a light-hearted round of golf with anyone who would join him.

He was also a talented woodworker and could turn any piece of wood (his preference was oak) into anything beautiful. The wish of others was his command, and nothing was too great of a request for his skills: jewelry boxes, bookshelves, headboards, various cabinets, dressers, tables, stools, and inlays are all treasures in the homes of those he loved and will continue to bless generations to come.

Dan served as a Sargent in the U.S. Marine Corps from 1961-1966 and was aboard the U.S.S. Kearsarge during the splash down of the “Faith 7” Mercury space capsule carrying astronaut Gordon Cooper. He also worked as Club Manager of Briarwood Sporting Club for nearly 17 years and a private estate manager before retiring as a heavy equipment operator with Milligan Construction Co. of Sidney.

A gathering of remembrance for Dan will be Tuesday, Aug. 17, from 3 to 5 p.m. at Shoffstall Funeral Home, 205 S. Main St., Lakeview, with military rites performed by the Logan County Veterans Honor Guard.

Memorial Contributions in Dan’s memory may be given to St. Rita’s Hospice.
Services are in the care of Shoffstall Funeral Home. Condolences may be expressed at shoffstallfuneralhome.com.