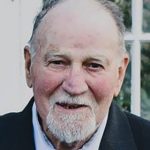 Charles E. Smith, 83, of Bellefontaine, passed away peacefully on Friday, Dec. 25, 2020, at Riverside Methodist Hospital in Columbus. Charles was born on Jan. 2, 1937, in Lafayette, to the late George Sr. and Vivian Smith.
Charles was a 1955 graduate of Lafayette High School. He married the love of his life, Roberta Fleming, on June 10, 1956. She precedes him in death. He is survived by his siblings George Smith Jr. and Joan Clark, four children: Jeffery (Janet) Smith, Suzette (Doug) Crabtree, Antoinette Smith, and Eli Smith, and grandchildren Randy (Colleen) Wallace, Daniel (Hagar) Wallace, LeAnn (Andrew) Brunson, Nick (Alyson) Woodard, Aaron (Monica) Eli, Shelby (John) Roberts, and nine great-grandchildren.
He was preceded in death by his brother, Gary Smith, sisters-in-law, Sharon Smith and Evelyn Smith, brother-in-law, Louie Clark, two infant sisters, and granddaughter, Breanne Roberts.
Charles was a carpenter by trade and spent many years of his life in the carpentry business, even owning his own business at one point. In his later years, he worked as a handyman. He loved to work with his hands and especially loved woodworking. He enjoyed spending time with his family and his dogs, and loved being outdoors. He was also an avid Ohio State and Raiders fan. Charles was a very lovable and easy going man. He was easy to talk to, and a friend to everyone he met.
Due to COVID-19 precautions, services will be held for immediate family only. A celebration of life will be held at a later date, when it is safe to gather. In lieu of flowers, the family requests that donations be made to a hospice of your choice. Arrangements are in the care of Jennings Farley & Seeley Funeral Home & Crematory.
Post Views: 312