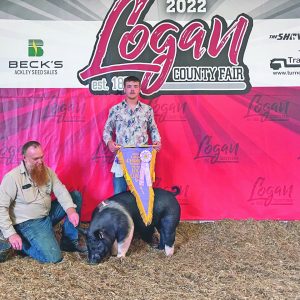 “I was excited to make it to the final champion drive for the first time,” said Owen O’Brien, a Benjamin Logan FFA vice president and Master Mix 4-H Vice President, who has been showing at the fair since fourth-grade.

“My sister began showing ahead of me, and once you start showing, you don’t want to stop.”

His gilt entry, “Fern,” is a real sweetheart, Owen said, noting that,”she’ll lay in your lap if you let her.” Fern also won the lightweight champion award.

The West Mansfield resident is looking forward to attending the University of Northwestern Ohio after high school, where he is interested in studying agribusiness or potentially being an agronomist. He also serves as the captain of the BLHS wrestling team. 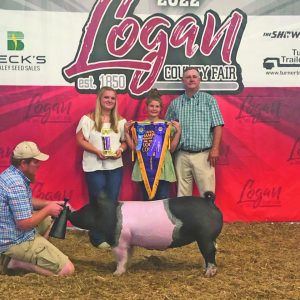 Also in the gilt category, 10-year-old Kylee Zedeker was excited to capture Grand Champion honors with her entry “Dot,” who also won the middleweight champion award.

A resident of Iowa during the school year, where she lives with her mother, she participates in the Logan County Livestock 4-H Club during the summertime when staying with her father and family in Bellefontaine.

“My favorite thing about the fair is all of the support out here, and getting to hang out with our family and friends,” she said. 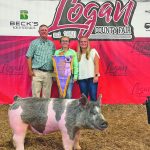 Madilynn said July 11 must be her lucky day — on the same date six years ago, she also received Reserve Grand Champion honors in the same show at the Logan County Fair.

In the fall, Madilynn will be a freshman at Bellefontaine High School. She is also a member of the Logan County Livestock 4-H Club. 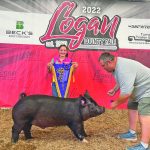 The Grand Champion barrow honors went to 13-year-old Anara Shroyer for her entry, which also won the heavyweight champion award.

The Indian Lake Middle School seventh-grader and member of the Miami Valley Producers 4-H Club said it was her first time receiving the top award for market hogs. She and her sisters also show goats and market lambs.