Benjamin Logan students Winnie Bodin, sixth-grade and Averi Lane, 10th-grade, presented their scientific research projects at the local and district level, and recently learned that their projects have been selected to compete at the 2020 Virtual State Science Day. 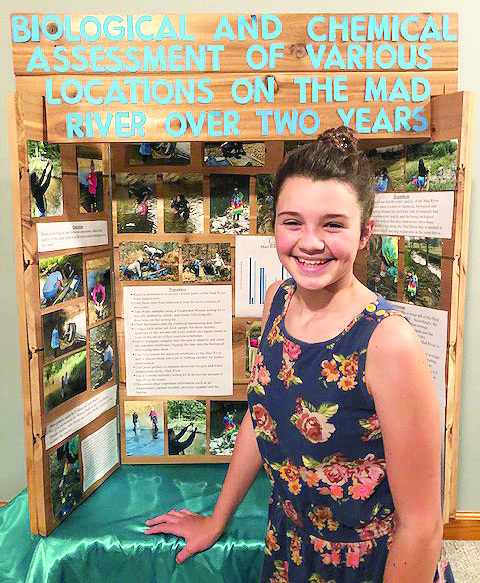 Despite the unusual circumstances this year, the Ohio Academy of Science is making every effort to ensure that students have the opportunity to present at State Science Day. Each year, thousands of Ohio students complete independent research projects at the State Science Day event, a highlight of student-based scientific-research.

Winnie shared information about her project titled, “Biological and Chemical Assessment of Various Locations on the Mad River over Two Years.”

“My project began with an assessment of the Mad River that I monitored over two years. Each site was tested for macroinvertebrates and chemical characteristics once every three months over the course of a year.

I collected macroinvertebrates using kick seine technique, and they were identified and a pollution tolerance index was recorded based on the taxa collected.”

“My hypothesis was that the Mad River water quality would be poor due to previous years of research showing poor quality and also because it is lacking a wooded riparian zone therefore the river lacks shad,” the sixth-grader said.”My hypothesis was partly supported because the PTI was poor; however, the chemical parameter and oxygen levels were considered at a good level.”

Averi’s project was titled, “The Effects of Growth Regulators on Tomato Plants.”
“Through my experiments, I have treated Delicious variety tomato plants with three types of growth regulators to see the result of increasing or decreasing specific plant hormones,” she said. “The growth regulators I am using are Gibberellins 4+7, Paclobutraol, and Ethephon.”

She related that Gibberellins causes the plants to grow taller, Paclobutrazol makes them shorter, and Ethephon makes them exhibit a stress response.

“I currently have approximately 100 plants growing as part of my experiment. As I continue to treat them with growth regulators, I will soon be able to see what the effects of hormones are on the fruits themselves, in addition to the growth of the plants.”

Benjamin Logan teacher Spencer Reames has provided guidance and support to Winnie and Averi during their research projects.